"This writing was copied out anew by his majesty in the House of his father Ptah-South-of-his-Wall, for his majesty found it to be a work of the ancestors which was worm-eaten, so that it could not be understood from beginning t
o end. His majesty copied it anew so that it might become better than it had been before, in order that his name might endur
e and his monument last in the House of his father Ptah-South-of-his-Wall throughout eternity, as a work done by the son of Re, Shabaka, for his father Ptah-Tatenen, so that he might live forever."
--Preface to The Memphite Theology on the order of Shabaka, Per Uah of the 25th Kemetic Dynasty, 710 b.c.e.
"Cherish study, avoid the dance, so you'll become an excellent official. Do not yearn after outdoor pleasures, hunting and fishing; shun boomerang throwing and the chase. Write diligently by day; recite at night. Let your friends be the papyrus roll and the scribal palette; such work is sweeter than wine. Indeed writing, for one who knows it, is far better than all other professions, pleasanter than bread and beer, more delightful than clothes and perfumed ointments, more precious than a legacy in Kemet, than a tomb in the West."
--Neb-Maa-Re Nakht, Royal Scribe (Sesh Nesw), 20th Kemetic Dynasty, c. 1500 b.c.e.
The legendary W.E.B. DuBois was known for his passionate moderation. In bed daily by eleven p.m. A remarkably disciplined reader and writer who planned research agendas with daily tasks over years and kept to them with low tolerance for interruption. A literal human metronome of consistency and intellectual productivity.
In writing about the Reconstruction period in U.S. history, Dr. DuBois captured a strikingly similar combination of intellectual passion, consistency and productivity as he marked the determination of "an entire race" to go to school in the wake of the end of the U.S. Civil War. As Mary Bethune would remark before Congress in 1939, within several generations, a people who had been pressed into functional illiteracy in the reading and writing of the English language had produced generations of students who had mastered the language and set out to dismantle the system that had required their miseducation. Ms. Bethune and Dr. DuBois (pictured here in the famous 1936 photograph taken on the steps of Frederi
ck Douglass Hall with Adelaide Cromwell, Monroe Work, Charles Wesley, James Weldon Johnson, Alain Locke, Arturo Schomburg and Mordecai Wyatt Johnson, among others as they worked on the landmark Encyclopedia of the Negro) were only two amon 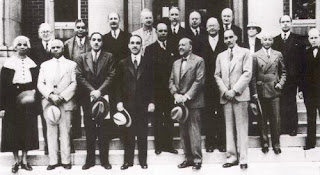 g the ranks of pioneering scholar-educators who traced the institutional memory of the African quest for education in the United States.
As we engaged in line for line readings and translations of two of the most famous texts in Kemetic literature, the considera
tion of the origins of reality in the so-called Memphite Theology and a mediatio
n on the field and functionof intellectual life as distinct from all other field of labor entitled The Instructions of Dua-Khety (more commonly known as The Satire of the Trades), our students opened a deep and energized consideration of the fact that the African-American quest for education has its roots in the dawn of the human experience.
At the center of Africana intellectual work is respect for the process of reading and writing and the determination to provide methods for collective learning. The notion of the group "learning community" has its origins in 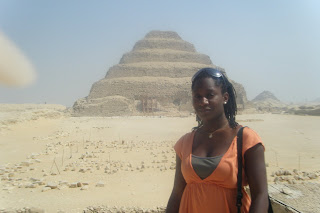 Kemet. From the Kemetic sites of scholarly instruction (known as the "Per Ankh" or "House of Life") to evidence of scholarly achievement ranging from the step pyramid (shown here behind Jazelle Hunt) and the stone structures of Imhotep that enclose it through the great convenings of scholars trained in Arabic, Songhai and other scripts at the great centers of learning at Timbuktu and Jenne in the 16th and 17th centuries; straight through the rites of intergenerational learning in Western and Eastern Africa that inspired Lord Baden-Powell to return to England and found The Explorers (t
he model for the subsequent Boy and Girl Scouts); to the collective struggle of Africans to retain the high skills and crafts of their home societies and to learn enough of each other's languages and skills to survive and resist enslavement while ship-bound; through the genius of their descendants to inherit those cultural markers and to pour them into educational institutions called Abakua, Poro and Maroon or Mason, Order of Eastern Star and Mutual Aid and Relief Society.
The Historically Black College and University has inherited these Maroon sensibilities and the traditions of communal, collective learning that they represent. In the U.S., schools began to convene in hush harbors and one room cabins, far different than the imposing stone structures we have borne witness to so far in Kemet. Yet some things have remained the same: the determination to right that which is wrong; to rebuild anew, better than before 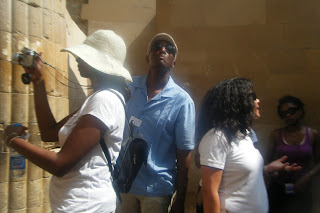 . To shape the future in ways that respect the contributions of the past in ways that do not deify the ancestors while listening to the wisdom that their experiences provide.
Today, we set forth for the temples preserved on the Island of Philae. When next we blog, I hope to continue this discussion of how the texts we have begun to consider in great detail capture the tone and tenor of Africana approaches to intellectual work.
Posted by Greg Carr at 10:39 PM

So the question I pose to your students is: How do we get young African Americans to take up the mantle of intellectual work in our public schools and not be so easily swayed by the educational paradigm that is counter to intellectual work?

That is the essential question facing our young people, particularly given the fact that public education is the largest single institution wielding influence over their lives. The challenge at the K-12 level remains one of methodology--the conceptual frame, approaches and techniques that shape teaching and learning. One model which has been remarkably successful in aligning student learning and learning outcomes with the long-view African intellectual tradition is the Philadelphia Freedom Schools Model (the institution that you, Sis Tammi, helped to create and shape in deep and enduring ways). I will discuss that model in the context of classical African studies and contemporary Africana intellectual work in education in a subsequent post.

I think that it's important to show (not tell) how and why this exploration is relevant to their lives and identities. So often, it's not a question of what do we do, but what do they think (or fail to realize), and why?

Warm greeting from the House of flagg

My heart beat is quickened with every post I read. I am so proud of work that Dr Carr and you young people are doing. Up you mighty race, do what you will. Reclaim our glory for yourself, but more so for those of us that may never come to where you are now.

Beautiful...here in Philadelphia at Freedom School "we copy anew" the foundation set for us, before us; an improvisation, an continuation of an echo of inscribed memory that still rings in our ears.
Hey Doc! How r u?? U will be proud of your Black Star scholars. Yesterday (8-08-09) they previewd their "institutional memory" project and it was great. They began with Kemet, I was so proud. Our students are the reason we do this.

Very quickly: I've been banned from my site, they don't feel safe with me on the premises hahahaha little ol' me. Fill u in when u return. Love ya!!

I also wanted to take a stab at that question Sistah Tammi posted:

I am not sure if there is one solution to the issue of public education, but I think that the continued work of Maroons such as Dr. Carr, Mama Aisha, myself and those few at Philadelphia Freedom School, who work in the public sphere counter that anti-intellectual paradigm everyday. There is no way, in my opinion, to sway all public school children, but our presence sways a few, and puts forth a growth that will sway others later in their lifes journey. This movement of sovereignty, if that is our assumed goal, will take more than a lifetime, it will take the lifetimes of many and as maroons we must be patient and aware that we may not live to see our sovereign nation but that our work will contribute to our greater mission and hopefully our children will have to fight less. With that being said, our mission is to BE PRESENT, and to be the BEST WE CAN BE. We're not missionaries, but we have to be present and like Doc always says, create a space for those who have been swayed, and for those who will be swayed later in life. Sovereign Institution building is a way to tackle the "public" paradigm.

And let's not forget part of being present is actively engagingly, building those bridges with even the non-maroons who might be in the public schools holding down forts. Often times these folks are key to helping build that sovereignty -- sometimes there gon be folks who don't want to leave the plantation but will help you with all their might get as many folks off as possible. They cannot be discounted.

do you want to study in abroad today or in the next intake. we are the best and top rated study abroad consultancies in india with good visa assurance.we help you in filing the f1 visa for you in very less time. we are also help you with information needed to apply for the college university. education consultants in hyderabad

The BBB acknowledges that many online institutions are reputable and offer legitimate services, Teolinda Gersao