Methodology, Translation and The Eloquence of the Scribes

“For us, the retrieval of the Egyptian heritage in all our disciplines is a first, necessary step on the way to Africa’s civilizations' rendevous with history. It is a condition we must fulfill before we can design an up-to-date corpus of disciplines in the humanities and the social sciences, the foundation for the renovation of African culture. Far from being a self-indulgent fixation on the past, the examination of ancient Egypt is our wisest option if we intend to plan and create our cultural future. The heritage of Greek and Roman antiquity has had a decisive impact on Western culture. Just as profoundly, the heritage of ancient Egypt will help shape the African culture we aspire to rethink and remake.”

Yesterday afternoon, we arrived in Aswan, the southernmost border of Kemet during its early period and the gateway through which the genius of inner Africa entered the Nile Valley. The word "Aswan" is likely taken from the Kemetic Sewenet, or "trading post." Five thousand years after the unification of the various societies scattered throughout the valley by Menes, our little band of travelers found 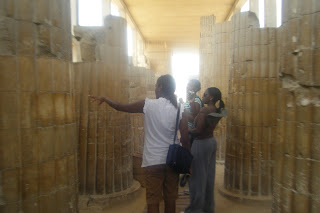 ourselves at a trading station of sorts, buying potato chips and drinks from the descendants of the original Nubian inhabitants of this region, flooded out of their villages after the construction of the High Dam in the 1960s and relocated to the city. Before evening's end, we managed to collapse time and space and convene a conversation on the power of translating ideas and information from one time to another and, in so doing, mediating a conversation between Africa past, present and future.

We'd spent the morning in Saqqara, the largest national cemetery of Kemet, a place bristling with the undisturbed graves of some of the society’s most notable figures. Kemet referred to cemeteries as the "land of the Westerners," attended by Wosir (Osiris), the governor of the West. As we entered the looming festival and pyramid complex of the 3rd Dynasty's Per Uah Djoser (2650 b.c.e.) through the hall of the world’s first stone building built by his counselor and architect Imhotep, I found myself tracing the polished limestone with my fingers, pondering the magnitude of the moment. Imhotep was revered in Kemetic memory and the Greeks identified him with as Aesculapius, the patron of physicians. The Hippocratic oath taken by doctors contains his name among the litany of figures in whose name they promise to wield their ability and judgement.

Earlier, we had spent productive time in the tombs of Ptah Hotep, [Literally "God's Peace"] and Kagemmi, two administrators of the early period, and in the burial chamber of the pyramid of Per Uah [Literally "Great House"] Pepi, of the 6th dynasty. As has been mentioned in multiple posts, Ptah Hotep's "instructions" are recognized as the first collection of wisdom teachings in world historical memory. They have been an anchoring force in my own intellectual work since I was introduced to them twenty years ago by the brilliant scholar Jacob Hudson Carruthers, Jr. (Djedi Shemsu Djehuty, or "The One Who Speaks is a Follower of Djehuty"). Dr. Carruthers, the first African American to master the ability to read and translate Medew Netcher and in many ways the father of contemporary Kemetic language studies among African-Americans, was a son of the southern Black Methodist tradition who received his college education at the hand of, among others, James Farmer, Sr. (the towering figure portrayed by Forrest Whittaker in the film account of the Wiley College debate team, The Great Debaters).

I remember standing next to Baba Djedi as we stood in the hot sand of the mammoth festival enclosure, facing Imhotep's step pyramid, in 1996. I was one of his young apprentices at the time, and had returned with my own apprentices, determined to help them enter the intellectual work I had been recruited to what seems like so long ago. As I stood there watching them take pictures, I was reminded of the importance of our work to establish a place from which to view and interpret the world and reality. The imperative of this work informed the essence of August Wilson’s famous 1996 address The Ground on Which I Stand, delivered before the national convention of the Theatre Communications Group in Princeton, New Jersey. Long tired of fighting to establish spaces where the voices and visions of African people could be presented without interpreters or mediators in the theater arts, Wilson declared the imperative of generating clear space to occupy and speak to the world from the convened authority of the Black experience.

Even in a moment when Wilson—widely lauded as the pre-eminent voice among African dramatists in the United States—declared that “we will not be denied our history, “ he evoked the Greeks as his point of remembering departure. A testimony about the nature of the “ground on which I stand and all the many grounds on which I and my ancestors have toiled” nevertheless began with Euripides, Aeschylus and Sophocles, continued through Shakespeare, Shaw and Ibsen and emptied into O’Neill, Miller and Williams. Africa only entered Wilson’s forceful testament with the Maroons, from Nat Turner and Denmark Vesey to Delany, Garvey and The Honorable Elijah Muhammad.

The irony dripping from Wilson’s observation that “we cannot share a single value system if that value system consists of the values of white Americans based on their European ancestors” and continues with the contention that “we need a value system that includes our contributions as Africans in America” had, as with very nearly every other declaration of Africana intellectual autonomy celebrated beyond the smaller circles of long-view rememberers, constructed and embraced an Africa balanced on a temporal fulcrum constructed entirely out of the signal but amputating moment of enslavement. Try as he might, and succeed as he had, Wilson could no more transcend the limiting confines of such a framework than Toni Morrison, Zora Neale Hurston, Sterling Brown, Alvin Ailey or Maya Angelou.

In short, the grounds on which these brilliant conjurers of Africana stood were only gingerly traipsed, an unordered, wide-ranging but ultimately irreconcilable collage of sounds, images, ideas and experiences, convened to give succor and hope, comfort and voice but not context, fortifying self-consciousness and, ultimately, full-bred humanity. The struggle to voice the complex rhythms of African deep thought and long-view historical memory continues to face the challenge of methodology. How do we approach the study of Africana? A central element of this challenge is the practice of translation, or the work of discovering, recovering and extending the intellectual work of previous centuries and millennia of thinkers.

“The history of Africa will remain suspended in air and cannot be written correctly until African historians connect it with the history of Egypt.”

We ended our first class session in Cairo Monday night with this discussion of methodology. The conversation was framed by the opening quote in this post, drawn from the work of the Senegalese scholar Cheikh Anta Diop. Diop, born in Djourbel Senegal in 1923, is widely recognized as the major intellectual force advancing the work of the study of classical Africa in the second half of the twentieth century. The thrust of Diop's work can be captured in two lines of thought. First, Diop examined the origins of human society, advancing the study of the original contributions of Kemet in the sciences and 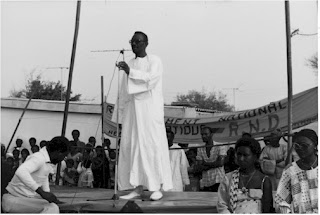 humanities, among other areas. Second, he traced the cultural, linguistic and intellectual interconnectedness of inner Africa, describing the relationship between groups ranging from the Akan, Dogon and Yoruba of West Africa to the Ki-Kongo and Lingala of Central Africa and the Shillik, Nuer and Dinka of East Africa and Kemetic archetypes and structures.

Diop's work reminds us that the Africans who find themselves in the western hemisphere continue to convene meaning around the grammars and vocabularies of Africana meaning-making, that set of normative assumptions about the world that also informed the lives and work of classical Africa. It is only through beginning to grasp the long-view contribution of Africa to world history that we can hope to find our own voices and define the grounds of which we stand. Such an effort will reveal the necessity to re-think the concept of academic disciplines, going beyond even conversations of inter or multidisciplinarity to reach more essential questions of the purpose, form and function of knowledge. Over the next stages of our journey, our students will continue to explore the imperative, techniques and possibilities of engaging the long-view African intellectual tradition in deep study, sense for sense and semantic translation, discovery and recovery, and the production of a flowering range of methods for making sense of memory in the context of our contemporary moment.

Feeling real privileged to be following these posts right about now. Wow. You makin it plain Doc!