Arrival in Waset (Thebes): The Power and the Most Select of Places 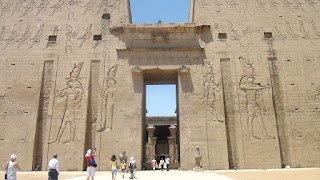 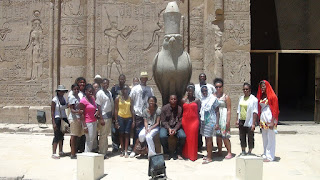 We have arrived at the world's largest temple complex of the classical era, the nearly two mile stretch of buildings known as Ipet Isut (Karnak to the Greeks) and Southern Opet (Luxor Temple). The collective area, which covers both sides of the Nile and includes the Valley of the Kings and Queens, was called Waset ("The Scepter of Power") by the Ancients and Thebes by the Greeks. Here, Kemet centered the marriage of governance structure, spiritual philosophy, scientific inquiry and artistic expression, beginning in predynastic times and stretching across the entire unbroken three millennium life of the nation. Traveling here by bus from Aswan yesterday, we stopped at two of the most important temple sites of the Late Period, the massive double temple complex dedicated to Sobek and Haroeris at Kom Ombo and the imposing Temple to Heru (Horus) at Edfu, the largest temple remaining from classical Kemet (note the scale in the picture above: we are standing next to one of the figures of Heru as a falcon that appears so tiny in the picture of the temple pylons).

At Kom Ombo, we considered the significance of the double "holy of holies," examined the temple's "per medjat" (library, or literally "house of books"), its "per ankh" ("house of life," where scribal instruction was carried out) and the stunning display of medical instruments and techniques, including various scalpels, forceps, sponges, mortars and cupping vessels that link the practice of medicine from the 2700 b.c. era of Imhotep (who the Greek swore to as Asclepius in the Hypocratic Oath) through the age of Greek and Roman study under Kemetic tutelage in the third century b.c.e.

At Edfu, we explored the remarkable recitation in stone of the "Battle of Heru and Set," a central narrative of testing one's character in the face of the ultimate adversity that lies near the center of Kemetic cosmology. The night before, our last in the idyllic surroundings of Aswan, the gateway to Nubia in classical and contemporary times, we reviewed the implications of African concepts of character, from the Kemetic through the Yoruba idea of "iwa rere" to contemporary moorings in African-Centered psychology.

Our nightly class sessions have reached a watershed of intensity as our students have begun to grasp a basic familiarity with elements of Kemetic language. Today, we will examine the implications of a national building project that, like the pyramid age, was designed to bond the entire population to a common purpose and resonant social meaning: the elevation of the Divine as a first order organizing principle of national life. Today's work is the first necessary step toward bringing together all we have learned and are laying the foundation for studying.

We are working to upload many more images, some video and the power points from our class sessions shortly. The internet access here is better than in Aswan, which will facilitate our efforts. Keep reading!
Posted by Greg Carr at 12:04 AM

overseas education consultants in himayat nagar do you want to study in abroad today or in the next intake. we are the best and top rated study abroad consultancies in india with good visa assurance.we help you in filing the f1 visa for you in very less time. we are also help you with information needed to apply for the college university.