Attempt to Limit Me.-I AM AFRICAN. I WILL RESIST.


Temple visits today!!!! Today we had a 2:15 wake up call due to the fact that we had to make a 4 hour drive down to Abu Simbel which is close to Sudan. We also visited the Nubian Museum. It is official, I am sick. I have a little cold, but I refuse to miss anything. As Dr. Carr says, “You can’t come this far, and not take the last two steps.” I will take these last two steps, even if I have to crawl them. 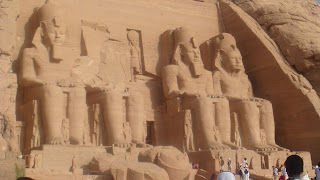 Abu Simbel: the Temple of Ramses II is dedicated to ReHurakhte, Amon, & Ramses II himself. He built it as a warning to tribes further south, of his absolute power and a glorification of himself and his great deeds. He chose the location with such precision so that twice a year the first rays of the sun rising illuminated the Holy of Holies located in the temple. The days which this 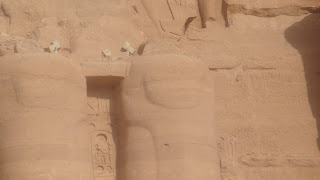 occurred were February 22 (his birthday) and Oct 22. After the temple was moved due to the building of the High Dam, the days are now February 21 and October 22. 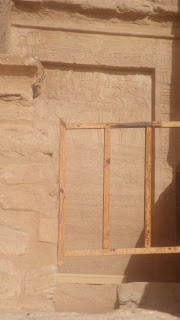 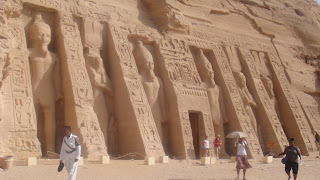 The temple of Nefertarti is located next to Abu Simbel. It was built for Ramses II’s first and favorite wife, Nefertari. The temple is dedicated to Hathor and is smaller than the great temple Ramses built for himself. Ramases' temple was extravagant and fueled the argument of the height of his arrogance. In my opinion, I do not think it was arrogance. His conceitedness was well deserved. He ruled for 67 years and was an essential and vital part of the development of ancient Egypt.

The worst part of the day was the fact that we were not allowed to take pictures and talking was also prohibited, i.e. tour guides. There was an incident where Dr. Carr was explaining some glyphs to us and someone came in, reprimanded him with a firm “No talking” and made an attempt to kick him out of the area. Furthermore, there are unnecessary areas designated for no pictures in the temples and there are people with no authority to enforce it. There are many times I have found myself restraining my thoughts from being spoken in not so many words to let them know that they have no right to impose limitations on how I choose to document the work of my ancestors. Then have even less of a right to take them from me if I do, such as they did to one of my peers. I need them to start showing respect and stop using tourism as a means for their own economic enhancement.

The environment of the Nubian Museum was less strict than that of the temples. They gave us full access to take pictures and even allowed us to touch some of the pieces. The museum highlighted Nubian culture and civilization in comparison to that of the Egyptian. In my opinion, there should be more museums like the Nubian Museum. 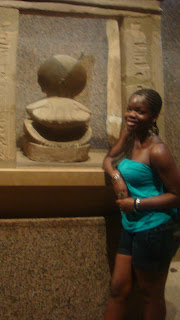 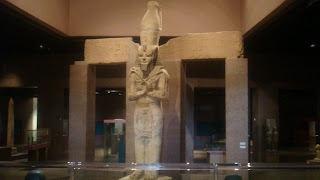